“Moist and Tasty” is an eleven-minute single-channel HD video, made in 2010. The video grew out of a scene with an American woman baking cookies and discussing topics of a sexual nature.  Inspired, I decided to ask my Japanese friends simple questions regarding those topics.  Their answers show how culture and ideas about sex are interrelated.
In this video, multiple videos would appear simultaneously on the screen. I used multi-channel video to correspond to the multiple windows on the computer desktop in the scene of the Skype conversation. However, more importantly, I used multiple screens to connect time and distance.
By following those rules above, I use a journalistic approach to my videos to discuss the daily politics that I experience in everyday life. An unscripted interview and improvised performance are two important elements to my videos. This triggers a subjective reaction in the video’s participants, thus turning them into “co-authors” of the narrative.
As a theme, my works often involve global issues in local contexts. I layer multiple unrelated subjects within one video, so it does not discuss one issue or problem, but shows a large net of complex relationships between the subjects. 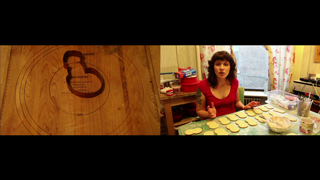 First tests of the film being projected onto the wall: